Not long ago on Twitter, where my handle is @wordspinster, I made a joke about the recent announcement that Facebook has now become FACEBOOK. ‘Should I rebrand as WORDSPINSTER’, I tweeted, ‘or is that just silly?’

But some people who saw this tweet either hadn’t followed the FACEBOOK story or else they didn’t make the connection. They thought I might be planning to extend the use of my Twitter handle to other domains—this blog, for instance—and they didn’t think that was a great idea, because of the negative associations of the word ‘spinster’.

Choosing @wordspinster as my handle was another joke, and to get it you need to know a bit of English linguistic and social history. The ‘-ster’ in ‘spinster’ comes from the Old English feminine agentive suffix ‘-estre’, which could be added to verb-stems to form occupational titles. The last names ‘Brewster’ and ‘Baxter’, for instance, were once terms denoting women whose job was brewing or baking. ‘Spinster’ meant a woman whose occupation was spinning yarn.

Spinning, in fact, was the prototypical female occupation: though there is some uncertainty about, in one historian’s words, ‘the relative importance of age, marital status, and husband’s occupation in determining which women spun’, by the early 17th century ‘spinster’ had become the legal term that designated unmarried women in general (a status it would retain until the introduction of civil partnerships in 2005). About a hundred years later, written evidence shows that ‘spinster’ had started to be used in the way it is mainly used today: as a pejorative label akin to ‘old maid‘, applied to women who were no longer young, but who had not succeeded in finding husbands.

My Twitter-name ‘wordspinster’ was meant to riff on the modern pejorative meaning of ‘spinster’ (since I myself am no longer young, and there’s no chance I’ll ever have a husband), while also alluding to the original occupational meaning (since you could say my job involves ‘spinning words’). It was, in addition, a nod to those feminists—most notably Mary Daly—who had promoted ‘spinster’ as a positive term. 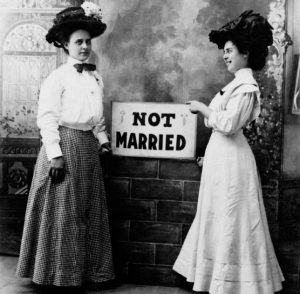 (Daly’s definition, recorded in her Wickedary, was ‘a woman whose occupation is to Spin, to participate in the whirling movement of creation; one who has chosen her Self, who defines her Self by choice neither in relation to children nor to men; one who is Self-identified; a whirling dervish, Spiraling in New Time/Space’.) I’m not sure who I thought would appreciate this joke—which seems even more obscure now I’ve written this lengthy explanation of it—but hell, it’s only Twitter, and it gave me a certain satisfaction.

Anyway, by one of those strange coincidences that sometimes happen on social media, while I was sorting out the confusion my tweet had caused, the writer Becky Kleanthous tweeted a link to a piece she’d written which also raised the issue of ‘spinster’ and its negative associations. It was prompted by the reaction to something the actor Emma Watson, who will turn 30 next year, had said in an interview with Vogue:

It took me a long time, but I’m very happy [being single]. I call it being self-partnered.

For this Watson was pilloried on social media. Some critics re-stated the common-sense belief that no woman really wants to be single: a female celebrity who says she’s happy that way is either lying to conceal her shame, or hoping to attract attention by saying something ‘controversial’. Others focused on the term ‘self-partnered’, which was criticised for being pretentious, narcissistic and, as one man commented (in a bravura display of missing the point), ‘utterly offputting to potential suitors’.

I’ll admit to finding ‘self-partnered’ a rather peculiar expression myself—a bit like Gwyneth Paltrow’s description of splitting up with that bloke from Coldplay as ‘conscious uncoupling’. But it’s not hard to see why Watson might have chosen it. Reminiscent of Mary Daly’s ‘one who has chosen her Self’, ‘self-partnered’ presents the single woman not as a failure or a freak, but as someone who chooses, and values, her independence. Which led Becky Kleanthous to float an idea: instead of resorting to new-agey neologisms, ‘what’, she asked, ‘if single women embraced the pejorative label “spinster”?’

This is not a new suggestion. Since the 19th century there have been periodic calls for women to reclaim both the word and the status it names. In 2015, when Kate Bolick published a well-received book entitled Spinster: Making A Life of One’s Own, there was a spate of think-pieces asserting that the shame was over and the spinster’s time had come. But evidently it wasn’t and it hadn’t. The word is still being avoided, unless a speaker is being ironic (Emma Watson could not have told Vogue, unironically, ‘I’m very happy being single. I call it being a spinster’), and it still elicits strongly negative reactions. In 2005, when ‘spinster’ ceased to be the official legal term for unmarried women, even the radical lesbian feminist Julie Bindel declared that she was glad to see it go. ‘The word’, she wrote, ‘is not reclaimable’. But what is it that makes ‘spinster’ so resistant to rehabilitation? If ‘bitch’ and ‘slut’ are considered reclaimable (by some feminists, at least), why should ‘spinster’ be a harder nut to crack?

To answer that question, we need to look more closely at what kind of pejorative label ‘spinster’ is. And one way of doing that is to compare it with its supposed male equivalent, ‘bachelor’. The basic definition of both terms is ‘an unmarried person’: in theory the only difference between them is that ‘spinster’ refers to a female person whereas ‘bachelor’ names a male one. But if you look at the way they’re used in practice, it’s obvious their meanings are not the same.

One person who has investigated the differences is the corpus linguist Paul Baker. When he examined the use of ‘bachelor’ in the British National Corpus (BNC), he found that although it can have negative overtones (suggesting that a man is socially isolated, or hinting that he is secretly gay), more commonly the bachelor is a happy heterosexual, attractive to women and envied by other men. Calling a man a ‘bachelor’, regardless of his age, need not imply that he will never marry, and certainly not that he is celibate. The BNC contains many examples like these:

Calling a woman a ‘spinster’, by contrast, does generally imply that her single status is permanent, unchosen and probably resented. In the BNC, Baker finds, spinsters are recurrently described as ‘unattractive, plain, sex-starved or sexually frustrated’. He also observes that whereas the carefree ‘eligible’ bachelor is a familiar figure, the ‘happy young spinster’ is not.

It’s not that unmarried women can’t be happy, young and ‘eligible’, but if they are, we avoid the label ‘spinster’. No one would throw a ‘spinster party’ for a bride-to-be, or commission a reality TV show called ‘The Spinster’. For the not-yet-married-but-still-desirable woman we prefer to use words derived from the more positive male term, like ‘bachelorette‘ and the (now archaic but once popular) ‘bachelor girl’. Both terms, incidentally, were first recorded in the 1890s: ‘spinster’-avoidance isn’t new.

This evidence about its usage (and avoidance) suggests a reason why ‘spinster’ might be harder to reclaim than ‘bitch’ or ‘slut’. As Julie Bindel remarked in 2005, the word ‘will never sound sassy or cool’. I think that goes to the heart of the problem: ‘spinster’ is associated with two things which are negatively evaluated in both mainstream and most contemporary feminist culture. One is sexual inactivity; the other is ageing. A bitch can be celebrated for her sassiness, and a slut (not unlike the bachelor) for her sexual adventurousness, but what can anyone find to celebrate about an older women who doesn’t have sex?

There’s a more general point to be made here about the project of reclaiming negative terms. Word meanings don’t change in a social vacuum: they change when there’s a shift in our cultural narratives, the stories we use words to tell. What’s behind our negative reactions to ‘spinster’, and the consequent failure of attempts to rehabilitate it, is the negativity of the prevailing cultural narratives about both female ageing and women without men.

As Clare Anderson points out in a recent book on this subject, ageing in women is almost invariably represented as an inexorable process of decline. This is the dominant narrative in literature on women’s health, in the fashion and lifestyle advice doled out by women’s magazines, and in the discourse of the beauty industry, which typically locates the onset of decline in a woman’s late 20s (after which it’s downhill all the way).

In the interviews she conducted with women and men about their personal experiences of getting older, Anderson found that although middle-aged and older women were critical of the ‘ageing as decline’ narrative, they still tended to reproduce its presuppositions when they talked about themselves, whereas the men she interviewed did not. In their late 40s and 50s, these men felt they were in their prime: they said they were happier, more confident and more at ease with their bodies than they had been when they were younger. Women of the same age reported more or less the opposite. As much as many of them disliked the prevailing discourse, their language suggested they had internalised it.

This ageist and sexist narrative doesn’t just affect women over 40. 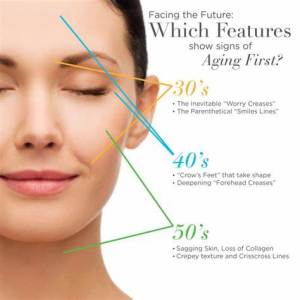 It’s also the basis for what Emma Watson experienced–the public dissection of her feelings about (still) being single at 29. The modern beauty and advice industries have made a speciality of telling women what they’re supposed to feel in their 20s, 30s, 40s, etc: Anderson and others call this ‘decadism’. If the end of a woman’s 20s marks the beginning of her long decline, then she can be expected to feel anxiety about being single: she knows the clock is ticking and her time is running out. And if, like Watson, she says that isn’t how she feels, people either don’t believe her or else they think there must be something wrong with her.

The same rules do not apply to male celebrities, or indeed to men in general. Not only is it assumed that a 30-year old man still has plenty of time to find the right one and settle down, it won’t be held against him if he never does. He will remain an ‘eligible bachelor’ for at least another 25 years. His female counterpart, on the other hand, had better get her skates on, before the once-eligible bachelorette turns into a frustrated and embittered old spinster.

Feminist attempts to reclaim ‘spinster’ have channelled the spirit of the old slogan ‘a woman without a man is like a fish without a bicycle’: they have celebrated the joys of independence and the freedom to please yourself. But what the response to Emma Watson’s ‘self-partnered’ comment illustrates is that for many people, a woman without a man is more like a fish out of water. Until that story changes, along with the story that men get better with age while women peak early and then decline, I don’t think many single women will embrace the label ‘spinster’. It will remain either an insult or—like my Twitter handle—an old crone’s joke.