It’s been a while since I posted anything about the policing of women’s language, but that’s not because the police have been idle: while I’ve been concerning myself with other matters, it’s been business as usual for the finger-wagging advicemongers. Here’s a recent example which I wouldn’t bother clicking on, since it’s just a rehash of the generic Bullshit Article About Women’s Language that’s been doing the rounds for the last two years. And here’s a piece about uptalk and vocal fry, which does contain one novel feature–a link to this blog, which the author cites to show she considered both sides of the argument before deciding to go with the ever-popular ‘stop it, you’re annoying people’.

Both these pieces use what I’m going to call the ‘let’s get real’ argument, which goes something like this: ‘it’s all very well to call out prejudice/preach tolerance, but the world is the way it is; the faster you adjust the more successful you’ll be’. My function, where a writer brings me into the discussion, is to represent the naive idealist whose extreme and unworldly opinions no true supporter of women should be distracted by.

Along those lines, yet another advicemonger recently informed her readers:

I’m not sure what she thinks the alternative is. Language wardens patrolling the offices of the nation, and fining women on the spot for saying ‘sorry’ or ‘just’? But the laissez faire attitude she attributes to me is not what I’ve argued for either. No one has total freedom to speak however they want, at least if they want to be (a) intelligible to others and (b) considered a competent member of society. My aspirations for women are more modest: I’d just like them to be able to speak without constantly being told they’re doing it wrong.

But to my critics this is shockingly irresponsible, and does women no favours at all. As they see it, telling women to mind their ‘justs‘ and ‘sorries‘ is like telling a stranger in the toilets she’s accidentally tucked her skirt into her knickers–she might be embarrassed, but she’ll also be grateful.

Some women evidently are grateful. Whenever I criticise some egregious piece of sexist language policing, I get a couple of emails from women who protest that they have personally found it helpful. I don’t argue with them: obviously only they can say whether or not they found something helpful. But in the spirit of ‘let’s get real’, I do have a question about how the advice has helped them.

You might think the answer is obvious: it’s helped them by prompting them to change the way they speak, cutting out the bad habits that make them ‘sound doormat’. But in reality that’s not very likely. All the evidence suggests that criticism of a linguistic feature does a good job of making people aware of it, but has little effect on the way they actually use it. Think of all the grammar, spelling and pronunciation shibboleths (double negatives, ‘aint’, ‘we was’, h-dropping, t-glottalling, saying ‘somefink’, writing ‘it’s’ when it should be ‘its’, etc.) which have been relentlessly criticised for decades or even centuries. Most English-speakers are well aware that these features are stigmatised, and most believe the stigma is deserved. Yet that hasn’t led to a decline in their use: in some cases they’ve spread rapidly since the criticism started.

This isn’t as paradoxical as it sounds. Our ideas about good and bad language may be derived from the pronouncements of authorities (like parents, teachers, or the people who write opinion pieces in the media), but our actual behaviour is much more strongly influenced by the speech of the people we converse with directly. When we talk to someone, we have a tendency to ‘accommodate’ to them, usually by (subconsciously) making our speech more similar to theirs. This is one way speech-patterns like uptalk spread. More generally, a lot of our spoken output is produced without much conscious reflection. It’s habitual, automatic, below-the-radar behaviour, and as such quite difficult to modify.

Of course, there are people who’ve succeeded in altering their habitual speech-patterns, either permanently (like Margaret Thatcher, who lowered her voice-pitch in a bid to sound more authoritative), or temporarily (like the actors and impressionists who can perform in various different accents and vocal personae). But these cases are notable precisely because they’re unusual. Success depends on a combination of aptitude, motivation, structured training and intensive practice; failure is not unusual.

Yet most critics of women’s speech seem to think there’s nothing to it. They have plenty to say about why you should stop saying X, Y and Z, but nothing to say about how you’re meant to do it. The implication is that once you’ve become aware of what you’re doing wrong, you can simply decide to stop. It’s ironic that these critics so often describe the features they want women to stop using as ‘verbal tics’. As much as I hate this inaccurate and trivialising use of the phrase, you’d think the word ‘tic’, meaning an involuntary response which the subject cannot control, might be a clue to the fact that changing your speech-habits isn’t easy.

Occasionally advice-writers do pay attention to the ‘how’ question. One of my favourite examples is a WikiHow entry headed ‘How to stop saying the word “like”’. 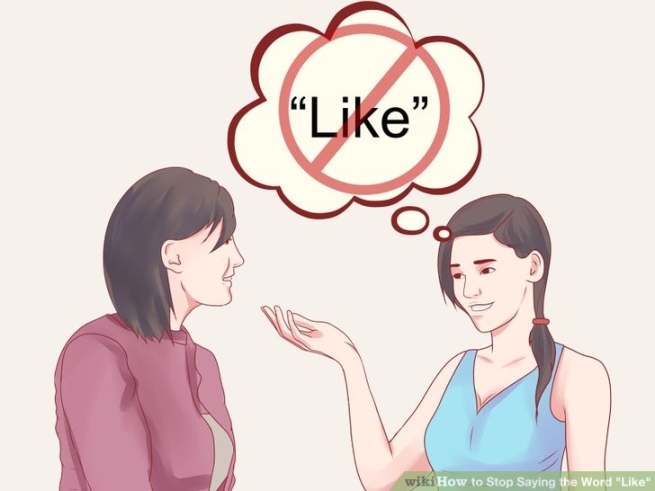 The reader’s mission, should she choose to accept it, is to train herself (I’m using feminine pronouns advisedly: all the visual illustrations depict young women) to use ‘like’ only in its two ‘proper’ meanings, which are ‘enjoy’ (as in ‘I like chocolate’) and ‘similar to’ (as in ‘that tastes like chocolate’), while breaking the bad habit of using ‘like’ as a quotative (‘she was like, who cares?’), an approximator (‘she’s like, five feet tall’) or just an all-purpose filler. The author recognises that this is a challenging task, and offers strategies for approaching it in a systematic way. For instance:

The last tip is to persevere, since your efforts may not bear fruit immediately. No kidding: it’s hard to imagine anything more fruitless than trying to follow this advice. Whoever was unlucky enough to engage you in conversation would be baffled, if not maddened, by your strange inability to talk at a normal speed, your sudden unexplained silences, your weirdly formal vocabulary and your peculiar habit of reporting others’ speech as though you were writing the dialogue in a bad novel (she quipped, sarcastically). It’s heartbreakingly earnest, and about as much use as the proverbial chocolate teapot.

In that it is not unusual: the world is full of useless advice. Some people have argued that the uselessness of the advice it offers is the secret of the self-improvement industry’s success: if the advice really worked, people wouldn’t keep coming back for more. But some research has raised the question, is it actually advice that people are after?

Research done with people who regularly read self-help books has found that the advice element of the genre is not very important to them. The books are generally marketed on the promise of solving readers’ problems, but readers themselves say that isn’t what they read them for: rather their goal is to understand themselves better. A ‘good’ book, as they see it, provides a description of the problem which they can recognise themselves in, along with an explanation of what’s behind the problem that resonates with their own experience. The benefits they say they get from this include feeling validated (‘this writer understands me’) and feeling more able to cope with their situation. As one woman explained to the researcher Wendy Simonds, ‘if I understand something, I feel a little bit better about it; I don’t feel so overwhelmed and so helpless’.

This may also be what my correspondents mean when they tell me they find advice on speaking helpful. Not that it’s transformed their behaviour, but that it’s given them a valuable insight into their problems. Their situation may not have changed, but at least someone has explained it in a way that seems to make sense (‘you aren’t getting respect because your tentative and apologetic way of speaking undermines your authority’).

There are parallels here with the experience of feminists. If you’re a feminist, it’s because, among other things, you think feminism explains women’s situation and their problems in a way that makes sense. Most feminists can recall moments when their understanding was changed by a conversation in a group, or by something they read in a book; and most would probably agree that this felt like a positive experience, even though on its own it didn’t solve anything. To change your situation you first need to understand it: that’s one belief feminism shares with self-help.

But there are also important differences. Feminist consciousness raising—the process of reflecting on experience and coming to understand it differently—is meant to lead to collective political action, the goal of which is to change the social structures that are ultimately responsible for women’s situation. Self-help, on the other hand, is committed to an ideology of hyper-individualism, whose two core tenets are (1) you’re in control of your own destiny, and (2) the only thing you have the power to change is yourself.

Not only does this mean that changing yourself has to be the solution to every problem, it also means that self-help has to downplay the social dimension of the problems that confront its readers. Women’s experiences of sexism in all its forms, from being ignored in meetings to being trapped in abusive relationships, are persistently presented as avoidable consequences of their own bad choices or self-destructive behaviour-patterns. The good news, however, is that women can solve their problems by making better choices and adopting different patterns of behaviour. You don’t have to ‘sound doormat’ forever: the remedy is in your own hands.

It’s not hard to understand why many women might find this message of individual empowerment more appealing than some old sourpuss like me banging on about structural inequality. But let’s just get real here. If you believe there is such a thing as society, and that one of its organising principles is gender hierarchy–male dominance and female subordination– then suggesting that women should deal with problems like workplace discrimination by changing their way of speaking will look less like empowerment and more like victim-blaming. It will also look like a mystification: not something that helps women to understand their situation, but something that stops them from seeing it clearly and working together to change it.

One thought on “Getting real about bad advice”