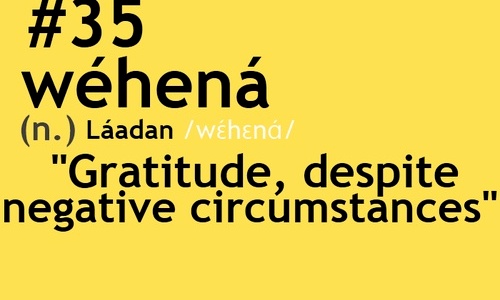 From time to time in Language: A Feminist Guide, I think it’s good to reflect on the  herstory of feminist linguistic ideas and interventions. A while ago I wrote about the feminist dictionaries which proliferated during the 1970s and 1980s. And this week I want to write about another ambitious project of that era: the creation of a women’s language by the linguist and speculative fiction writer Suzette Haden Elgin, who died earlier this year.

Stories about women’s languages—languages used only by a community’s women, and not known by the men—have been told since Europeans first travelled to the Americas, but it has generally turned out that these accounts were misleading. What early observers were noticing wasn’t the existence of completely different male and female languages, but significant variation in the way men and women used the same language: sometimes this resulted from the operation of taboo, with women being forbidden to utter certain words or sounds, and therefore resorting to variant forms or circumlocutions that men had no reason to use. More recently, some popular discussions of the Chinese script called Nushu (‘women’s writing’) have referred to it as a ‘women’s language’, but in fact it isn’t a separate language, it’s a different way of writing Chinese, which women developed at a time when they had no access to education. It’s a tribute to women’s ingenuity, but also a product of their historically subordinate status. The same is true of the fictional women’s language Suzette Haden Elgin developed in the 1980s.

In 1984 Elgin published Native Tongue, the first novel in a trilogy exploring ideas about language, gender and feminism. Rather like The Handmaid’s Tale, which came out the following year, Native Tongue is set in a dystopian future where North American women have lost their civil rights and are subject to the authority of their male relatives. The women whose lives the book centres on are linguists, members of a privileged but hated caste: in a world where Earth’s prosperity depends on interplanetary trade, it is linguists who perform the crucial task of facilitating communication between humans and extra-terrestrials. Linguist women are unlike others in that they work outside their homes as interpreters. At home they are responsible for bearing and rearing the next generation, and when their reproductive lives are over they are sent to the ‘Barren House’ to knit, gossip and drink tea. Or at least, that’s what their menfolk think they are doing: in fact they are planning to overthrow the patriarchy using the language they are busy creating—a new language which, unlike all previous languages, expresses the perceptions of women rather than men.

The theoretical idea which Elgin explores in this narrative was popular among 1980s radical feminists (readers of my own generation may associate it particularly with Dale Spender’s Man Made Language, first published in 1980). It’s a version of what’s commonly referred to as the ‘Sapir-Whorf hypothesis’, after the two American linguists, Edward Sapir and Benjamin Lee Whorf, who proposed it in the early 20th century. Their hypothesis was that your perception of reality was shaped (or in more extreme versions, determined) by the grammar of your native language. A person who grew up speaking a ‘standard average European’ language would experience even such basic phenomena as time and space differently from one who grew up speaking, say, an indigenous American language like Hopi. The feminist spin on this idea, as implied by Spender’s title, was that language had been created by men, and expressed a male world-view, which women also internalized in the process of learning to speak. To escape from this form of patriarchal indoctrination, and give authentic voice to female experience, women needed to (re)invent language for themselves.

In Native Tongue, Elgin takes this idea both seriously and literally, by having her female linguist characters invent a new language, called Láadan, from scratch. She could have chosen to evoke this imaginary women’s language by simply scattering a few indicative words and phrases through the text, but she decided to take it a stage further by creating a full sound-system, grammatical structure and a basic vocabulary for Láadan. As she explained in an interview in 2007, she conceived of this as a ten-year thought experiment:

My hypothesis was that if I constructed a language designed specifically to provide a more adequate mechanism for expressing women’s perceptions, women would (a) embrace it and begin using it, or (b) embrace the idea but not the language, say “Elgin, you’ve got it all wrong!” and construct some other “women’s language” to replace it. The ten years went by, and neither of those things happened; Láadan got very little attention, even though SF3 actually published its grammar and dictionary and I published a cassette tape to go with it. Not once did any feminist magazine (or women’s magazine) ask me about the language or write a story about it. … My hypothesis therefore was proved invalid, and the conclusion I draw from that is that in fact women (by which I mean women who are literate in English, French, German, and Spanish, the languages in which Native Tongue appeared) do not find human languages inadequate for communication.

What did Elgin think would constitute ‘a more adequate mechanism for expressing women’s perceptions’? In the first place, she thought a women’s language would encode women’s perceptions in its core vocabulary. Her Láadan lexicon includes an elaborate vocabulary for specifically female bodily experiences: for instance, there’s a set of structurally related verbs with meanings like ‘to menstruate joyfully’, ‘to menstruate painfully’, ‘to menstruate early’ and ‘to menstruate for the first time’. There are also words expressing concepts derived from (what Elgin took to be) common female social experiences, like radiidin, meaning ‘a non-holiday: a time allegedly a holiday but actually so much of a burden because of work and preparations that it is a dreaded occasion, especially when there are too many guests and none of them help’; and ramimelh, meaning ‘to refrain from asking with evil intent, especially when it is clear that someone badly wants the other to ask’. It’s not that these ideas are inexpressible in English and other actually existing languages, but they can’t be expressed so economically. One of Elgin’s feminist grievances was that women are accused of ‘going on and on’ when they try to explain what they feel. She designed Láadan to forestall that criticism by condensing complicated experiences into single words.

She also designed the grammar of the language to pre-empt certain kinds of arguments about meaning or intention, which in her view often became an excuse for male hostility towards women (‘hey, don’t get upset, I only said X, I wasn’t being critical/accusing you of anything/telling you what to do!’ or ‘can’t you take a joke?’) In Láadan every sentence begins with a speech act marker indicating that what follows is a statement, question, request or command (Elgin suggests that the last of these should be rare among adults talking to other adults), and the marker has an ending showing how the speech act is intended (e.g. neutrally, angrily, humorously, to teach the hearer something or to tell a story). Sentences end with an ‘evidential’ marker (these exist in some natural languages too) revealing what evidence the speaker has for whatever they have just said (e.g. they know it’s true because they observed it directly, or they believe it because they heard it from a trusted source, or they saw it in a dream—or alternatively they don’t have any evidence). For instance, ‘the woman was weary’ can be expressed in Láadan as

In her book about the history of constructed languages, Arika Okrent suggests that these grammatical features have little to do, specifically, with the perceptions of women, and that Elgin, being a linguist, probably included them just because she thought they were neat. That may be the best explanation of why she chose to make Láadan a tone language (not something you’d do if your top priority was getting standard average European speakers to learn it); but I think her grammatical choices probably did have a more political motivation. Apart from her speculative fiction, Elgin was also the author of a linguistic self-help book called The Gentle Art of Verbal Self-Defense, which was animated by concern about the use of words to hurt, mislead or manipulate others. The grammar of Láadan may have been intended to make those things harder to do. That isn’t exclusively a feminist concern, but it’s in tune with the feminist values that are emphasized throughout her writing—in one critic’s summary, ‘community, communication and faith in the sisterhood of women’.

Elgin’s faith in sisterhood wasn’t always justified by the reception of Láadan. Some lesbian feminists accused her of prejudice on the grounds that the language contained no lesbian terminology. She apologized, and offered to rectify the omission by adding new lesbian vocabulary (she invited her critics to suggest words). But this encounter with the sometimes brutal realities of feminist politics caused her considerable distress. She also found it discouraging that while Láadan languished in obscurity, Klingon—a language constructed to express the worldview of hyper-masculine warriors—thrived. By the time she wrote the third novel in her trilogy, Earthsong, Elgin had concluded that the creation of a women’s language was not the solution to the problem of, as she put it, ‘humankind’s violence on this earth’. In this book Láadan has failed, just as Elgin thought it had failed in the real world, and the linguist women have turned to other forms of resistance. (I’ll say no more than that, since some of you may want to read the trilogy for yourselves–if you do, details are at the end of this post).

Back in the 1980s I loved reading the novels (as both a linguist and a feminist, how could I not), but I was never moved to learn the language: I was always sceptical about the idea of a language ‘expressing women’s perceptions’. Which perceptions would those be, and which women would they belong to? There is no set of perceptions which all women share. Women speak with many voices, in many languages, reflecting our different histories, cultures and political commitments. That doesn’t mean we can’t communicate, or find common ground. It just means we can’t take understanding, let alone sisterhood, for granted. These aren’t natural by-products of being female, but things we have to make an effort to create–accepting that we won’t always succeed.

I also believe that Dale Spender was wrong: just as there is no such thing as a universal language of women, so there is no ‘man made language’. In many times and places men have controlled the means through which speech and writing were publicly disseminated, but that doesn’t mean language itself was their creation. If language really belonged to men, and if it really forced women to perceive the world through a male patriarchal lens, how could Dale Spender have told us so in Man Made Language? How could Suzette Haden Elgin have created Láadan?

Though Elgin was disappointed by the lack of feminist enthusiasm for her creation, she still maintained that the experiment had been worthwhile. Perhaps she hadn’t entirely given up on it: she once said that patriarchal revolutions always failed because their leaders tried to take the quickest route from A to B, whereas a feminist revolution would succeed by being content to meander slowly towards its goal. Apparently she wanted to call the last volume of her trilogy The Meandering Water Tribe (a proposal her publisher vetoed). She compared the power of feminism to the force of water: ‘it wears away resistance gently but inexorably over time, and is almost impossible to withstand’.