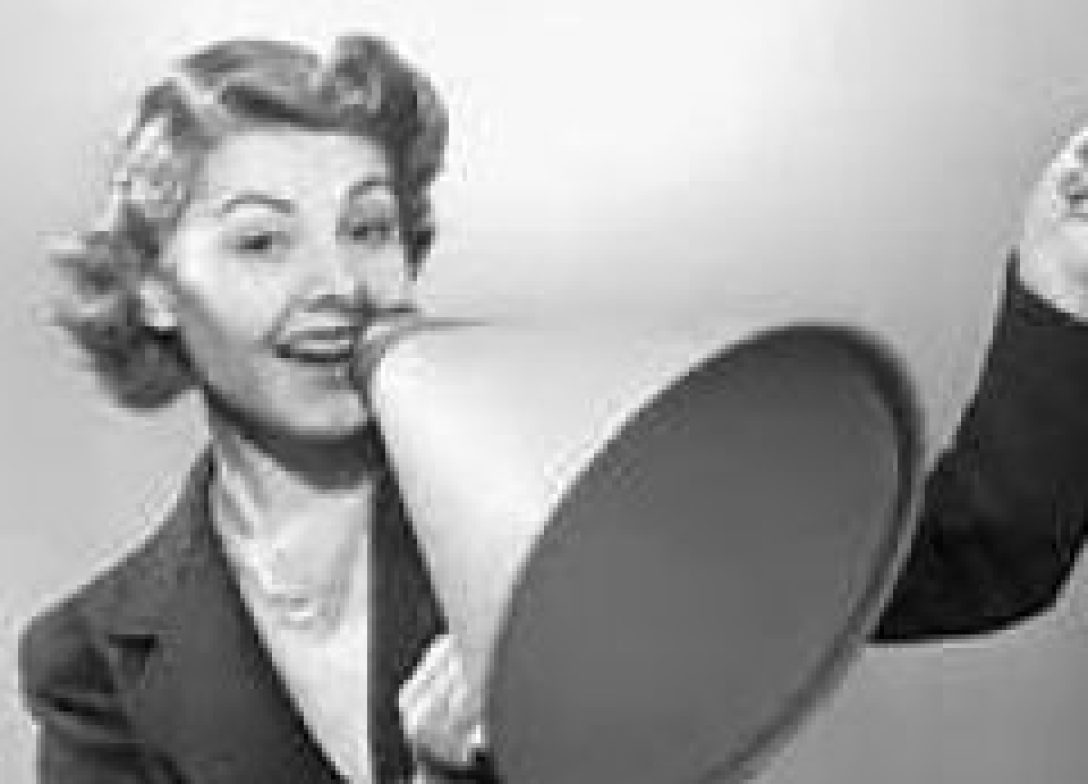 Three years ago, to mark the political party conference season, I wrote a post about Great Political Speeches—or rather, Great Male Political Speeches. On most Anglophone lists of the best speeches of all time you will find just one token woman, or if you’re really lucky, two. British list compilers typically select from a field consisting of Elizabeth I, Emmeline Pankhurst and Margaret Thatcher; their US counterparts, who (still) can’t choose a female president, tend to go for Susan B. Anthony or Sojourner Truth.

Of course, it’s not surprising if the female speechmakers of the past can’t compete with the likes of Abraham Lincoln, Winston Churchill, John F. Kennedy and Martin Luther King. In addition to being gifted orators, these men were leaders of global stature, speaking at key historical moments on subjects of grave import. Until recently very few women, however gifted, were in a position to tick any of those boxes. But even today, as the Labour MP Yvette Cooper says in the introduction to her recent anthology of women’s speeches She Speaks: The Power of Women’s Voices, ‘public speaking can still feel like a man’s world’. Though women are no longer banned from the podium, they still have to contend with various ancient sexist prejudices.

By way of illustration, Cooper quotes the introduction to an anthology of great speeches produced in the 1990s, where the editors offer three justifications for the near-absence of women. The first is the point I’ve just made myself, that women were historically excluded from the ‘great stages’. The second is that women ‘wanted no part in the macho game of domination by speech’ (really? In that case why did they spend much of the 19th century fighting for their right to speak in public without being denounced as unnatural and immoral?) But it’s the third justification that really grates: ‘women’s voices are not made by nature for oratory. They are not deep enough’. Though Cooper rightly calls it ‘ludicrous’, the prejudice against female voices is still alive and well: witness the complaints about Hillary Clinton’s ‘shrillness’ during the 2016 presidential campaign, and the outrage provoked by the BBC’s decision to let a woman commentate on the 2018 FIFA World Cup.

But in any case, these justifications begin from a false premise. They’re answers to the question ‘why haven’t women made speeches?’, when in fact women have made speeches: there’s a tradition of female oratory that goes back at least to the early 19th century. By the 1990s it wasn’t even true that there were no women speaking from ‘the great stages’. The anthology Cooper criticises was published, as she points out, in the same year Hillary Clinton made her ‘women’s rights are human rights’ speech in Beijing, and Benazir Bhutto addressed the UN as the first woman elected head of an Islamic state.

She Speaks is Cooper’s attempt to redress the balance. Her introduction makes clear that what inspired the project wasn’t just her irritation with male-dominated anthologies, but also her concern about recent developments in our public discourse. Whether it’s the casual misogyny of populist leaders like Donald Trump or the rape and death threats which any woman with a public platform can now expect to receive (Cooper reminds us that her colleague Jo Cox MP was murdered by a man who took exception to her views), she believes that women are being silenced, and she wants to encourage them to resist. ‘The women in this book wouldn’t stay quiet’, she writes. ‘Their words live on after their speeches and will live on after they have gone’.

So, who are the women in this book? There are 35 in all: about half of them are British, including political leaders (Boudica, Elizabeth I, Prime Ministers Thatcher and May), politicians (Eleanor Rathbone, Barbara Castle, Diane Abbott, Harriet Harman, Jo Cox, Cooper herself) and campaigners (Josephine Butler, Emmeline Pankhurst, Alison Drake, Emma Watson). Another fairly well-represented category is non-British female heads of state like Benazir Bhutto, Angela Merkel, Julia Gillard (yes, the ‘misogyny speech’) and Jacinda Ardern.

Predictably, the largest single group of non-Brits are American: political figures (Sojourner Truth, Michelle Obama, Alexandria Ocasio-Cortez), writers (Maya Angelou, Audre Lorde) and performers (Lupita Nyong’o, Ellen DeGeneres). There are also two young activists with global profiles (Malala Yousefzai and Greta Thunberg), two Nobel laureates (one a physicist, the other the first African to win the Peace Prize, Wangari Maathai), a disability activist, a trans activist and a Holocaust survivor; there’s Chimamanda Ngozi Adichie’s celebrated ‘We Should All Be Feminists’ TED talk, and a speech by Kavita Krishnan of the All India Progressive Women’s Association. The sequence is chronological, and in each case we get some contextualising discussion followed by the (sometimes abridged) text of the speech itself.

As exemplars of Great Speechmaking I’d say Cooper’s selections are a mixed bag.  I did feel that quite a lot of her choices were based less on the quality of the speeches themselves than on her view of the speaker and/or her life-story as inspiring. I thought that was a pity: since great male speeches are usually remembered for both reasons, it risks recycling the conventional wisdom that women lack men’s rhetorical skills.

This problem was most evident in the British politicians’ speeches. Cooper’s own contribution, urging Parliament to do for refugees fleeing war in Syria what Britain had done for those fleeing Nazism in the 1940s, is one of the better examples, rhetorically speaking. Apart from the two Tory Prime Ministers, her other choices are all women of her own party, many of them her colleagues and friends; she obviously admires them as people and as politicians, but they aren’t all great political speakers. In current British politics I don’t think there are many outstanding speakers of either sex; but I was surprised Cooper passed over one senior female politician who really does stand out for her rhetorical skills: the SNP leader and Scottish First Minister Nicola Sturgeon.

Among the non-British politicians, I was most impressed by Jacinda Ardern (speaking after the terrorist attack on a mosque in Christchurch) and Alexandria Ocasio-Cortez: both have the ability to fit their words to the occasion in a way that seems not merely apt, but uplifting. Michelle Obama’s 2016 Democratic Convention speech also gets high marks: it’s one of the few that contains a genuinely memorable line (‘when they go low, we go high’).

This example points to a perennial problem with anthologies of speeches: some of the qualities that make a speech great may be lost in the transition to print. In 2017 I praised Michelle Obama for the way she connected with her audience; her speech is still pretty good on the page, but it was her embodied presence and her rapport with the people in the hall that made it so compelling in its original, oral form.

Another case where some of the original magic has been lost in transcription is Julia Gillard’s famous ‘misogyny’ speech. If you watch her performance on video it’s electrifying, but as a text it’s surprisingly flat: the first part is still memorable, but the energy of the rest of it was more in the righteously angry delivery than in the language itself. (I do like this musical setting, however.) Similarly with Malala Yusefzai and Greta Thunberg: both hold your attention when they speak, but the written version of Malala’s ‘Education First’ speech to the UN is a more highly-crafted text, and thus more rewarding to read.

The biggest revelation, for me, was Kavita Krishnan excoriating the authorities after the gang-rape of Jyoti Singh on a Delhi bus. It’s a remarkable feminist speech–as Yvette Cooper says, both impassioned and forensic. It uses plain language in the service of a sophisticated argument, a skill which is all too rare. Here’s part of the last section by way of illustration:

Women have a right to freedom. And that freedom without fear is what we need to protect, to guard and respect.

Women know what ‘safety’ refers to.

It means—you behave yourself. You get back into the house. You don’t dress in a particular way. Do not live by your freedom, and this means that you are safe.

A whole range of patriarchal laws and institutions tell us what to do in the guise of keeping us ‘safe’. We reject this entire notion. We don’t want it.

The Delhi police is running an ad campaign… [with] a Hindi film actor exhorting people, ‘Be a man, join me in protecting women’. I want to ask, what about the brother who cuts his sister’s head off when she dares to marry into a different community? Is he not playing the role of a male protector too?

This machismo is not any solution to the problem of violence against women; it is, in fact, the root of the problem. This is what we need to understand.

For all that we live in a multimedia age, speeches like this one, delivered to the crowd at a protest, show that our oldest political communication technology has not lost its power. And it’s important that women can harness that power on equal terms with men.

Of course, just celebrating female speakers doesn’t remove either the structural barriers or the cultural prejudices that still prevent or deter women from speaking publicly; efforts to address those issues must continue. But we should also remember that, as the saying goes, ‘you can’t be what you can’t see’. Girls and women need to know that people like them not only can speak, but have spoken— powerfully, persuasively and movingly—on all kinds of subjects and in all kinds of situations. That’s where anthologies of women’s speeches have a part to play; I might quibble with some of Yvette Cooper’s choices, but her aim is one I think feminists should applaud.