This week we learned that the organisers of the Great British Beer Festival, an annual event sponsored by CAMRA, the Campaign for Real Ale, have taken the radical decision to ban alcoholic beverages with sexist names. The products which were said to have fallen foul of this new policy included a cider called ‘Slack Alice’ 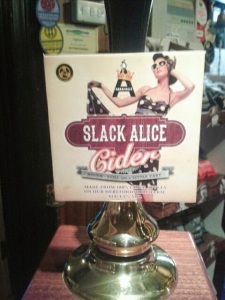 (whose makers describe it, hilariously, as ‘a little tart’), and beers named ‘Dizzy Blonde’, ‘Village Bike’ and ‘Leg Spreader’. A quick trawl of the internet produced a number of other potential candidates, such as ‘Bristol’s Ale’ (‘I’ll let the image reproduced below speak for itself), ‘Top Totty’, and ‘Voluptuous Vicky’.

In my last post, about the sexism of dictionary and thesaurus entries for the word ‘woman’, I pointed out that the vocabulary of English is rich in terms that represent women as men’s inferiors, dependents, servants and sexual objects. The beer and cider names just mentioned cover most of these bases—as with ‘humorous’ greeting cards and ‘saucy’ seaside postcards, there seems to be a particular obsession with double-entendres featuring breasts—but the thing I find most striking is how many of them are drawn from a very specific part of the lexicon of sexism: the extensive and elaborate set of terms which mean ‘an unchaste or promiscuous woman’. One who spreads her legs for any man, or has been ‘ridden’ by every man in the village. Who is ‘slack’, a ‘little tart’, a strumpet, a slut, a whore.

As feminists have been pointing out for at least the last 45 years, there is no analogous set of slur-terms denoting men. Men who have a lot of sex are ‘studs’ rather than ‘whores’. ‘Gigolo’ can be an insult, but that’s about it. As Amanda Montell summarises the rule in her recent book Wordslut: (incidentally, I’m not going to get into the debate on reclaiming ‘slut’, but there’s a good concise discussion of the word’s past and present uses in this blog post by Nancy Friedman):

Even then, as Montell observes, there are far more insults based on the first principle than the second. Where do they all come from?

Quite a few are the result of a process which the linguist Muriel Schulz named ‘the semantic derogation of women’. As she explained:

Again and again in the history of the language, one finds that a perfectly innocent term designating a girl or a woman may begin with totally neutral or even positive connotations, but that gradually it acquires negative implications, at first perhaps only slightly disparaging, but after a period of time becoming abusive and ending as a sexual slur.

‘Tart’, for instance, started out as a term of endearment, like ‘sweetie’ or ‘cupcake’. ‘Hussy’ is a variant of ‘housewife’, a neutral occupational label. ‘Slut’ was always negative, but in its earlier meaning of ‘untidy or slovenly person’ it wasn’t a sexual slur. ‘Slack’, as in ‘Slack Alice’, can be applied to people of either sex, but it only means ‘unchaste, promiscuous’ when it’s used about a woman. If I criticised a man for being ‘slack’ I’d be implying that he was lazy or careless, not sexually incontinent or undiscriminating in his choice of partners. (Similarly, we can talk about ‘loose women’, but not ‘loose men’.)

Female promiscuity and prostitution belong to the set of socially taboo subjects which tend to generate a lot of slang words. The variety and inventiveness of this vocabulary has often been celebrated by lovers of language. There’s a famous literary example in John Barth’s novel The Sot-Weed Factor, a 1960s pastiche of 18th century picaresque novels like Tom Jones, where two characters identified as prostitutes engage in a prolonged verbal duel (it goes on for several pages) consisting entirely of English and French epithets meaning ‘prostitute’.

Amanda Montell also notes that some promiscuous woman-terms are ‘fun to say’. Archaic-sounding words like ‘strumpet’ and ‘harlot’, or newer coinages like ‘skankly hobag’, are colourful, exotic, over the top; other terms are ‘fun’ because, like ‘village bike’, they involve some kind of play on words. In all this celebration of linguistic creativity, it’s easy to forget that what we’re looking at is a long list of sexual, and sexist, slurs.

But why, you may be wondering, would sexual slur-terms be considered good names for alcoholic beverages? What are you trying to say when you call your product ‘Leg 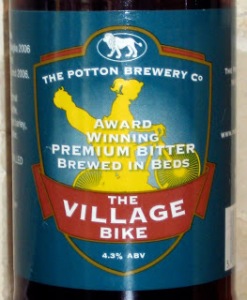 Spreader’ or ‘Village Bike’? Is it, ‘hey, lads, this one’s as good as Rohypnol if you’re looking to get your end away’? Or ‘this beer is convenient and undemanding–good for a quickie in the car-park, but you wouldn’t take it home to meet your parents’? Or is the point just to associate a product that targets a certain (male) demographic with something else that demographic is believed to be keen on?

Actually, I don’t think what’s behind these names is the old adage that ‘sex sells’ (there’s surely nothing sexy or aspirational about the Village Bike): what they’re selling has more to do with masculinity and male camaraderie. Beer, after all, is the classic male homosocial beverage, the one men consume while engaged in stereotypically male homosocial activities like watching the football on TV or having a night in the pub with the lads. Arguably, what’s being referenced in names like ‘Leg Spreader’ and ‘Village Bike’ is the stereotypical language of male homosocial bonding—our old friend ‘banter’, which, just like the crude beer names, is transgressive, politically incorrect and resolutely non-serious (hence the common coupling of the term ‘banter’ with words like ‘irreverent’, ‘witty’ and ‘light-hearted’).

In support of this interpretation I will cite what I consider to be—at least for this purpose—an unimpeachable source, namely the comments made on the CAMRA ban by readers of the Daily Mail. There were three points that recurred in this set of comments. The first (though in fairness it did not command universal agreement) was that beer is a man’s drink, and that in attempting to make it less off-putting to women, CAMRA was alienating its core constituency. The second point, which did command more or less universal agreement, was that banning ‘Slack Alice’ et al. was ‘PC nonsense’; and the third was that anyone who found these ‘light hearted’ names offensive must be a miserable git with no sense of humour.

Interestingly, a fair number of commenters felt impelled to add that in their experience, women are not at all offended by expressions like ‘village bike’. ‘All the women I know find this funny’, wrote one. ‘My wife’, affirmed another, ‘thinks [the ban] is PC, puerile condescension’. Yet another recalled that his ‘good lady’, an enthusiastic patron of beer festivals for many years, had only ever been put off a beer by its name on one occasion, when someone offered her a glass of ‘Old Fart’.

It’s always suspicious when a conversation about sexism consists predominantly of men making claims about what their wives, female friends and colleagues think, while the women themselves remain conspicuously silent. (The extract I quoted earlier from The Sot-Weed Factor is another case of a man putting words in women’s mouths and attitudes in their imaginary heads.)  But that’s not to say that the Mail readers’ wives, if asked, would share CAMRA’s attitude to ‘Slack Alice’ and her ilk. Women’s relationship to sexual slur terms is complicated: they have their own reasons for tolerating this kind of sexism, and even on occasion for joining in with it.

For many women who are not feminists, men’s fondness for beer, banter and busty women comes under the heading of ‘boys will be boys’. It’s seen as harmless, and they indulge it. It’s also common for casual sexism to be presented in the way the Mail comments do, as ‘light-hearted’, just a bit of fun. If you object to it, you’ll be that humourless person (and if you’re female, worse still, that humourless feminist killjoy) who doesn’t get, or can’t take, a joke. As I’ve said before, the charge of having no sense of humour is a surprisingly powerful one, and women are especially vulnerable to it (since it’s an old sexist stereotype that women can’t tell or understand jokes).

Another reason women may tolerate, or indeed actively embrace, the language of ‘sluts’ and ‘strumpets’ and ‘village bikes’ is to distinguish themselves from the women those epithets are aimed at. It certainly shouldn’t be thought that only men call women whores: there’s abundant evidence that women have been calling each other whores for centuries. What is known in modern parlance as ‘slut-shaming’ has long been, and continues to be, a way for women in patriarchal societies to exercise power over other women. Because of that, as I noted in an earlier post about sex and swearing, exchanges of sexual slurs between women were not usually light-hearted: accusations of unchastity could not be taken lightly, because a woman whose reputation was damaged by them faced real and serious social consequences. In some communities and situations that’s still the case today.

But surely, you might be thinking, you can’t compare the representation of women in beer names and on pumpclips with the slut-shaming of women in real life. ‘Slack Alice’ and ‘Voluptuous Vicky’ aren’t real people: their names may be sexist, but they’re clearly intended to be humorous, and arguably the humour is more affectionate than contemptuous. If you look at their visual representation, you’ll also notice that these women are presented as figures from a bygone age.

They exemplify, in fact, the advertising strategy that the cultural critic Judith Williamson labels ‘retrosexism’, where you use obviously ‘retro’ imagery (in this case it’s most often drawn from the mid-20th century visual language of either the seaside postcard or the pin-up photograph) to locate sexism firmly in the past. The implication is that we all know this isn’t meant to be taken seriously: the past was another country, and we’re enlightened enough now to look back and laugh at the absurdity of it.

As Williamson says, though, in reality the world is still full of entirely unreconstructed and un-ironic sexism. The retro style may be dated, but the substance–objectifying women and judging them by a sexual double standard which is not applied to men–shows no sign of withering away. In her view what retrosexism really expresses is nostalgia: the longing of many men, and some women, for a time when sexism wasn’t just (as it still is) a thing, but an acceptable, taken-for-granted thing. A time when nobody complained that tit jokes were offensive, or lectured cider-makers about slut-shaming, or tried to attract more women to beer festivals.

In Britain in 2019 there’s an awful lot of this nostalgia about—expressed not just in retrosexism but also retronationalism and retroimperialism. In that sense, the popularity of crudely sexist beer-names and 1940s imagery is a depressing sign of the times. I’m glad to see that CAMRA, at least, is not just keeping calm and carrying on.

All the images reproduced in this post are taken from Pumpclip Parade, a blog dedicated to ‘aesthetic atrocities from the world of beer’