Last week on Twitter I suggested that if you were looking for a potted guide to patriarchy you could try spending ten minutes in a high street card shop. I meant it, too. Since the 1970s feminists have been relentlessly critical of the sexist messages communicated in advertising, in the packaging of toys and the design of children’s clothes; yet we seem to have had much less to say about the sexism of mass-market greeting cards.

Maybe it’s because cards are ephemeral, displayed for a short time and then discarded. But in Britain particularly, we buy a lot of them: according to industry sources we’re the world’s most enthusiastic consumers of greeting cards, sending about 30 per person per year. Mother’s Day alone accounts for about 29 million sales, and the UK market overall is worth an annual £1.7 billion. Nor will it surprise you to hear that an estimated 85% of all these cards are bought by women. The job greeting cards do–maintaining relationships with family and friends–is a form of emotional labour which is generally considered part of women’s work. And the occasions they mark (births, marriages and deaths, anniversaries and other yearly celebrations) are part of the domestic or personal sphere with which women are traditionally associated. Which makes it all the more infuriating that so much of what’s on sale addresses women in ways that range from patronizing to outright misogynist.

What prompted my comment on Twitter was a photo someone posted of this pair of cards–I assume they’re Valentines, or at any rate intended for courting couples.

The person who posted the photo commented: ‘ah yes, the two sides of heterosexuality, commerce and toil’. Which is true enough, and sexist enough to be going on with; but what it doesn’t point out is that ‘make me a sandwich’ (or ‘sammich’) is a popular meme in the online manosphere, where it’s used as a put-down meaning ‘shut up woman, don’t you know your place is in the kitchen serving men?’ There’s no comparable implication of subservience in the boy-to-girl card. They might look like two versions of the same thing–one blue, one pink, both displaying the text in the same pseudo-handwriting with hearts instead of dots over the i–but on closer inspection they’re not.

This pair of cards exemplifies three patterns which are common across the whole greeting card genre. First, there’s the fact that the card addresses (or if you’re a fan of Louis Althusser you might say ‘interpellates’) the recipient, and often also the buyer/sender, as a gendered being.  That rule applies at every point in the human life-cycle. Want to congratulate someone on the birth of a baby? Great, but you’ll need to know the newborn’s sex so you can choose the right pastel shade (yep, we’re basically talking about blue and pink again) and the right words–as we all know, there are girl words and boy words. This gendering will continue when you select birthday cards for the child, and later the adult. Even the saccharine verses in birthday cards for older relatives use clearly gender-differentiated language–grandma is sweet and kind, while grandad is funny or ‘brilliant’.

You might think that this gendering is only natural: kinship terminology is systematically gender-marked, and the neutral words that do exist (e.g. ‘parent’, ‘sibling’) feel too impersonal for family occas 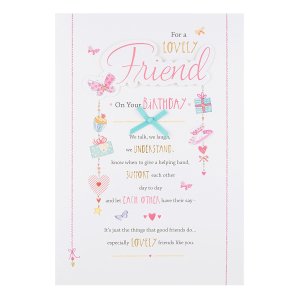 ions. But on its own that doesn’t explain why there’s such a stark difference in the message (the colours, images and words designers select), nor why so many cards addressed to friends rather than relatives are also gendered. The one on the left, for instance, has pink type, butterflies, cupcakes, and the word ‘lovely’–so although it doesn’t say explicitly that it’s meant for a female friend, a competent card-consumer will understand that.

Male friends aren’t ‘lovely’: they don’t listen, understand and support, they joke and josh and take the piss. A quick look at the male friendship cards available via Amazon suggests that humour rather than soppy stuff is the norm,  and offensive humour is particularly favoured (see the masterpiece below, which is described on the site as ‘perfect for male friends and brothers’). 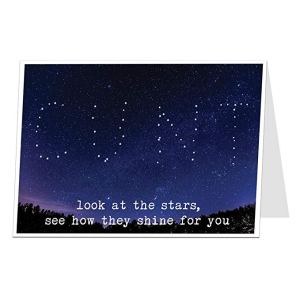 This is the second general pattern–a tendency to make use of the crassest imaginable stereotypes of masculinity and femininity.  Even if you’re looking for a same-sex wedding or civil partnership card you’ll find it hard to avoid gender stereotyping (though you will find rainbows instead of straight-up pink or blue).

But it’s the third pattern that’s most problematic from a feminist perspective:  the use made by card designers of a set of ancient tropes about heterosexual relationships, which appear with monotonous regularity, particularly though not only on cards marking heterosexual milestones (engagements, weddings, anniversaries).  Here’s a husband-to-wife example. 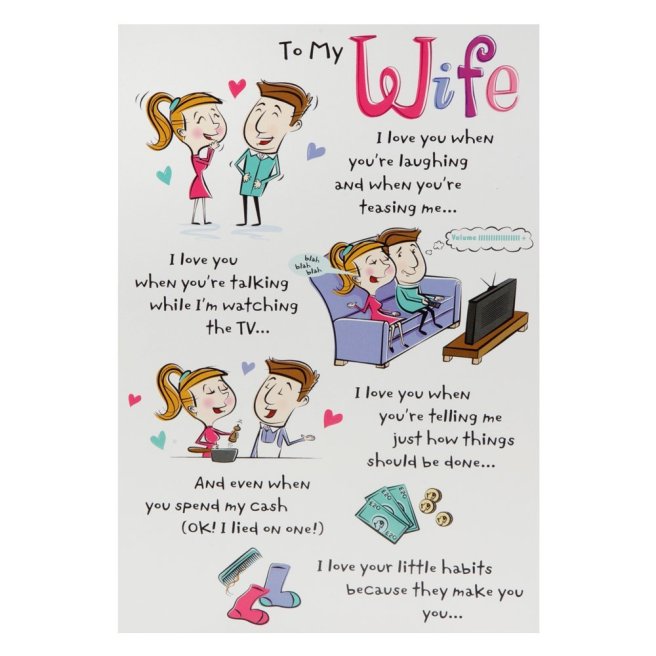 It’s the old cliché of the ‘battle of the sexes’, the idea of marriage, or more generally heterosexuality, as a never-ending struggle for supremacy between adversaries who also need, desire and depend on one another. From the middle ages to the present, this cliché has often incorporated the idea that even if it’s supposedly men who rule the world, we all know that in reality it’s women who have the upper hand–talking incessantly, bossing men around and spending all their hard-earned money (sorry, what century are we in again?) Men put up with this because they love women: it’s a case of ‘can’t live with them, can’t live without them’.  Or as this card, spotted a couple of years ago in a university bookshop, put it:

Call me old-fashioned, or maybe just a humourless feminist, but it’s difficult to find this joke amusing when you know that in Britain the number of women killed by men–the majority of them current or former partners–is 2-3 a week. When that point was put to the manager of the bookshop, she agreed, and said she’d stop displaying the card. But most examples of ‘battle of the sexes’ humour aren’t as shocking as this one, and their banal sexism continues to flourish unimpeded.

The other recurring heterosexual trope could be summed up as ‘all men are only after one thing, and all women are always gagging for it’. This kind of humour is probably most familiar from ‘saucy’ seaside postcards, but it also has a history on Christmas cards (some of them designed by the most famous of the seaside postcard artists, Donald McGill).

Today the language can leave less to the imagination.

Like the ‘I’d buy you flowers/make you a sandwich’ cards at the beginning of the post, these two Christmas cards (intended to be sent, respectively, from wife to husband and husband to wife) form a complementary set: one speaks in the voice of a female, the other in the voice of a male. But once again, these two voices aren’t just saying the same thing in slightly different words. As in so many representations of heterosex, the male speaks as an active sexual subject,  whereas the female adopts the receptive position. Incidentally, the website where I found these explains that the designer is a woman: she draws the images, and they are then ‘digitally enhanced by my rather clever husband’. You don’t have to be male to make your living from old-fashioned sexism.

Nor do you have to be female to be a target.  As one man reminded me indignantly on Twitter, cards are prone to stereotyping men as ‘fat, incompetent drunks who only like cars and football’.  He’s right, except that the range of things men are meant to like is slightly wider than cars and football–a glance at any ‘for men’ range will also turn up other objects with engines and/or wheels, such as motorbikes, boats and steam trains. The men who populate ‘humorous’ greeting cards are as one-dimensional as the women; and since anything soppy is off limits, there are even more of these joke cards addressed to men. What those cards don’t do, however, is propose to give men ‘a good stuffing’, or ‘shoot them and bury them in the garden’. Jokes about useless male slobs whose wives boss them around are a rather different thing from jokes about women making sandwiches or waiting for a ‘Christmas male’–because it’s male rather than female dominance that’s built into the social and sexual order. In any case, the feminist analysis isn’t ‘insulting women is bad, but insulting men is good’; these are two sides of the same patriarchal coin.

So what other options do we have?  A number of the women who responded to my tweet reported refusing to buy–and instructing their families not to buy for them–the patronizing, pinkified products on offer for birthdays, anniversaries and Mother’s Day; instead they chose more ‘neutral’ cards featuring artworks or animal pictures, with the inside left blank for the sender’s own message. And you can get actual feminist cards if you’re buying for feminist friends. But as some commenters pointed out, these ‘alternative’ products don’t cater for all the needs addressed by the mass market–for instance, one said she’d found it more or less impossible to source a card congratulating someone on the birth of a child that eschewed the usual gender stereotypes (or even came in a colour that wasn’t either pink or blue).

But while there’s some demand for alternatives to the sexist crap you see on the high street, or on Amazon, what I find really depressing is the continuing buoyancy of the market for sexist crap. Even at its most jaw-droppingly offensive (like the ‘can’t shoot them and bury them in the garden’ card) this stuff just doesn’t seem to generate the same kind of criticism as sexist adverts, toys and clothes. Some women evidently are voting with their purses, but is it time to actually say we’re Not Buying It? Should we be leaving sarky reviews on Amazon, and stickering offensive examples in card shops the way we used to put ‘this ad degrades women’ stickers on dodgy adverts in tube stations? If women really do purchase most of the greeting cards sold in Britain each year, then we ought to be able to send a message to the industry about the messages it’s sending us.